A new experiment. Bookmarking a few of the interesting things I’ve come across during the week. Hoping to curate this with a little more diversity in the future than is evident in this first pass.

We Could Have Had Electric Cars From the Beginning, Dan Albert. Rambles a bit, but eventually gets to the point of what caused the internal combustion engine to win out over the electric motor during the dawn of happy motoring. Spoiler: It was the appeal to American individualism and unchecked masculinity constantly put forth by Capitalism.

T.C. Boyle is Most Certainly Living His Best Life, Peter Nowogrodzki. Seven conversations with the writer whose story, “Greasy Lake,” got me started down the writing path when I was a dumb, young kid. I still love his work as a dumb, old dude.

The New Prometheus, Michael Swanwick. A new story in the Mongolian Wizard universe which crosses over with Frankenstein, which is in danger of becoming its own subgenre. Victorpunk, anyone?

Things I Learnt The Hard Way (in 30 Years of Software Development), Julio Biason. YMMV, but probably not too much. 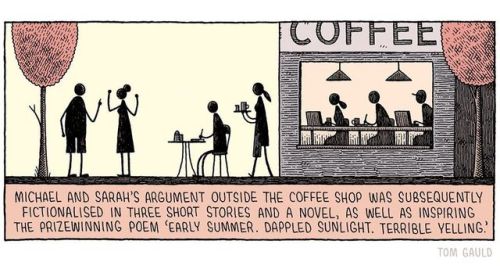 From the always wonderful Tom Gauld.

Vertigo Publishing Imprint to be Sunset at the End of the Year, DC Comics. Sigh. For those of us who haunted comics shops in the early 90s, this puts a cap on one of the best runs ever. I’ll write about this more sometime, maybe. Though I figured Vertigo for dead when they moved John Constantine into the DCU proper and stuck him in this mistake called Justice League Dark.